A producer consumer pattern for Jetty HTTP/2 with mechanical sympathy

Developing scalable servers in Java now requires careful consideration of mechanical sympathetic issues to achieve both high throughput and low latency.  With the introduction of HTTP/2 multiplexed semantics to Jetty, we have taken the opportunity to introduce a new execution strategy, named  “eat what you kill”[1]The EatWhatYouKill strategy is named after a hunting proverb in the sense that one should only kill to eat. The use of this phrase is not an endorsement of hunting nor killing of wildlife for food or … Continue reading, which is: avoiding dispatch latency; running tasks with hot caches; reducing contention and parallel slowdown; reducing memory footprint and queue depth.

The problem we are trying to solve is the producer consumer pattern, where one process produces tasks that need to be run to be consumed. This is a common pattern with two key examples in the Jetty Server:

For the purposes of this blog, we will consider the problem in general, with the producer represented by following interface:

The optimisation task that we trying to solve is how to handle potentially many producers, each producing many tasks to run, and how to run the tasks that they produce so that they are consumed in a timely and efficient manner.

The simplest solution to this pattern is to iteratively produce and consume as follows:

This strategy iteratively produces and consumes tasks in a single thread per Producer:

It has the advantage of simplicity, but suffers the fundamental flaw of head-of-line blocking (HOL):  If one of the tasks blocks or executes slowly (e.g. task C3 above), then subsequent tasks will be held up. This is actually good for a HTTP/1 connection where responses must be produced in the order of request, but is unacceptable for HTTP/2 connections where responses must be able to return in arbitrary order and one slow request cannot hold up other fast ones. It is also unacceptable for the NIO selection use-case as one slow/busy/blocked connection must not prevent other connections from being produced/consumed.

To solve the HOL blocking problem, multiple threads must be used so that produced tasks can be executed in parallel and even if one is slow or blocks, the other threads can progress the other tasks. The simplest application of threading is to place every task that is produced onto a queue to be consumed by an Executor:

This strategy could be considered the canonical solution to the producer consumer problem, where producers are separated from consumers by a queue and is at the heart of architectures such as SEDA. This strategy solves well the head of line blocking issue, since all tasks produced can complete independently in different threads (or cached threads):

However, while it solves the HOL blocking issue, it introduces a number of other significant issues:

Thus the ProduceExecuteConsume strategy has solved the HOL blocking concern but at the expense of very poor performance on both latency (dispatch times) and execution (cold caches), as well as introducing concerns of contention and back pressure. Many of these additional concerns involve the concept of Mechanical Sympathy, where the underlying mechanical design (i.e. CPU cores and caches) must be considered when designing scalable software.

How Bad Is It? 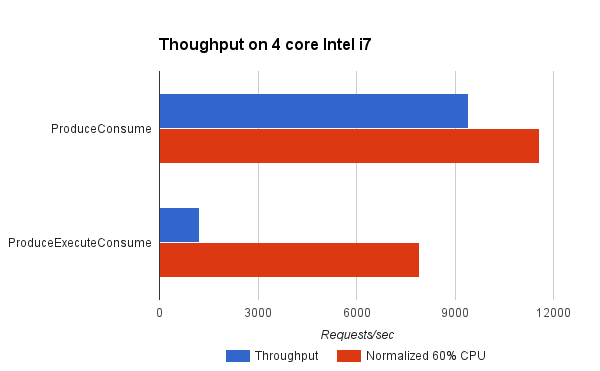 What Can Be Done?

Consideration of the SEDA architecture led to the development of the Disruptor pattern, which self describes as a “High performance alternative to bounded queues for exchanging data between concurrent threads”.  This pattern attacks the problem by replacing the queue between producer and consumer with a better data structure that can greatly improve the handing off of tasks between threads by considering the mechanical sympathetic concerns that affect the queue data structure itself.

While replacing the queue with a better mechanism may well greatly improve performance, our analysis was that it in Jetty it was the parallel slowdown of sharing the task data between threads that dominated any issues with the queue mechanism itself. Furthermore, the problem domain of a full SEDA-like architecture, whilst similar to the Jetty use-cases is not similar enough to take advantage of some of the more advanced semantics available with the disruptor.

Even with the most efficient queue replacement, the Jetty use-cases will suffer from some dispatch latency and parallel slow down from cold caches and contending related tasks.

Another technique for avoiding parallel slowdown is a Work Stealing scheduling strategy:

In a work stealing scheduler, each processor in a computer system has a queue of work items to perform…. New items are initially put on the queue of the processor executing the work item. When a processor runs out of work, it looks at the queues of other processors and “steals” their work items.

This concept initially looked very promising as it appear that it would allow related tasks to stay on the same CPU core and avoid the parallel slowdown issues described above.
It would require the single task queue to be broken up in to multiple queues, but there are suitable candidates for finer granularity queues available (e.g. the connection).

Unfortunately, several efforts to implement it within Jetty failed to find an elegant solution because it is not generally possible to stick a queue or thread to a processor and the interaction of task queues vs thread pool queues added an additional level of complexity. More over, because the approach still involves queues it does not solve the back pressure issues and the execution of tasks in a queue may flush the cache between production and consumption.

However consideration of the principles of Work Stealing inspired the creation of a new scheduling strategy that attempt to achieve the same result but without any queues.

Eat What You Kill!

The “Eat What You Kill”[2]The EatWhatYouKill strategy is named after a hunting proverb in the sense that one should only kill to eat. The use of this phrase is not an endorsement of hunting nor killing of wildlife for food or … Continue reading strategy (which could have been more prosaicly named ExecuteProduceConsume) has been designed to get the best of both worlds of the strategies presented above. It is nick named after the hunting movement that says a hunter should only kill an animal they intend to eat. Applied to the producer consumer problem this policy says that a thread must only produce (kill) a task if it intends to consume (eat) it immediately. However, unlike the ProduceConsume strategy that adheres to this principle, EatWhatYouKill still performs dispatches, but only to recruit new threads (hunters) to produce and consume more tasks while the current thread is busy eating !

This strategy can still operate like ProduceConsume using a loop to produce and consume tasks with a hot cache. A dispatch is performed to recruit a new thread to produce and consume, but on a busy server where the delay in dispatching a new thread may be large, the extra thread may arrive after all the work is done. Thus the extreme case on a busy server is that this strategy can behave like ProduceConsume with an extra noop dispatch:

Serial queueless execution like this is optimal for a servers throughput:  There is not queue of produced tasks wasting memory, as tasks are only produced when needed; tasks are always consumed with hot caches immediately after production.  Ideally each core and/or thread in a server is serially executing related tasks in this pattern… unless of course one tasks takes too long to execute and we need to avoid HOL blocking.

EatWhatYouKill avoids HOL blocking as it is able to recruit additional threads to iterate on production and consumption if the server is less busy and the dispatch delay is less than the time needed to consume a task.  In such cases, a new threads will be recruited to assist with producing and consuming, but each thread will consume what they produced using a hot cache and tasks can complete out of order:

On a mostly idle server, the dispatch delay may always be less than the time to consume a task and thus every task may be produced and consumed in its own dispatched thread:

An alternate way to visualise this strategy is to consider it like ProduceConsume, but that it dispatches extra threads to work steal production and consumption. These work stealing threads will only manage to steal work if the server is has spare capacity and the consumption of a task is risking HOL blocking.

This strategy has many benefits:

Indications from the benchmarks is that it is very good ! 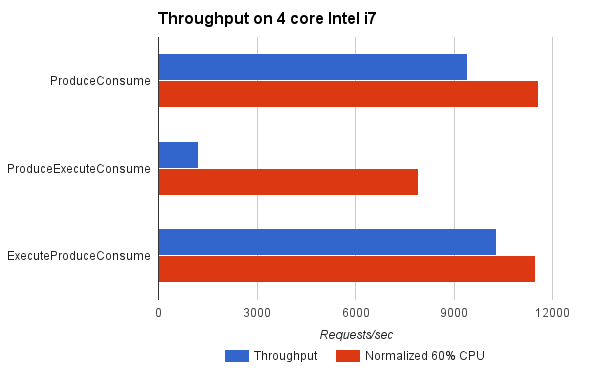 This indicates that you can kill your cake and eat it too! The same efficiency of  ProduceConsume can be achieved with the same HOL blocking prevention of ProduceExecuteConsume.

The EatWhatYouKill (aka ExecuteProduceConsume) strategy has been integrated into Jetty-9.3 for both NIO selection and HTTP/2 request handling. This makes it possible for the following sequence of events to occur within a single thread of execution:

This allows a single thread with hot cache to handle a request from I/O selection, through frame parsing to response generation with no queues or dispatch delays. This offers maximum efficiency of handling while avoiding the unacceptable HOL blocking.

Early indications are that Jetty-9.3 is indeed demonstrating a significant step forward in both low latency and high throughput.   This site has been running on EWYK Jetty-9.3 for some months.  We are confident that with this new execution strategy, Jetty will provide the most performant and scalable HTTP/2 implementation available in Java.

12 thoughts on “Eat What You Kill”